↓
Mark Johnson, the voice of the CU Buffs football and basketball teams, will be speaking at the COFA-Christian Outdoor Fellowship of America Breakfast on Saturday, March 6th at Davies’ Chuck Wagon Diner #2 10151 W. 26th Ave. Wheatridge, CO 8:00 AM to 9:30 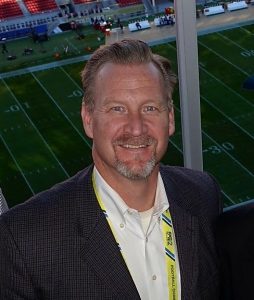 Mark, has an incredible testimony of how God came into his life; his inspiring words will captivate you as he shares insights on God’s word and how God has used him to share his faith in the sports world. Mark has been the play-by-play announcer for University of Colorado football and men’s basketball since 2004, has joined the athletic department full-time as its director of audio broadcasting.

Johnson graduated from the University of North Dakota with a degree in Communications in 1992, but was already working in radio as a student.  His first job in sports was calling high school games in Mankato, Minn., before returning to his alma mater to announce games from 1993-95.  His first position in Division I came at Illinois State (1998-2002), calling both football and men’s basketball, before moving on to Syracuse to do the same.  He worked there for two full seasons (2002-04), where he had the opportunity to call the 2003 national championship win by the Orange men’s basketball team, which featured former Denver Nugget Carmelo Anthony.

About Us
History
Biographies
Women's Outreach
We Believe
Contact COFA

Get a daily devotion for the outdoor enthusiast! By going to our COFAtips website you can sign up for these daily (Monday-Friday) devotions or sign up to get reminder notices prior to each of our events.
Sign Up for COFAtips COFATips